Excerpts from field reports during my trip to Afghanistan to deploy CommCare with female, illiterate CHWs

This week has been less exciting but still frantically busy, with time devoted to:

We did two days of training which concluded yesterday, upon which we signed over the phones to the CHWs and they took them back to the village. So we’re live! kinda.

Iterating on a multi-media app is frustrating, because the lead time of getting any new content or changes to existing content creates so many loose ends. [a bunch of boring shop talk omitted]. The only major issue at this point is that CommCare auto-send is not working (even though ‘Network Test’ diagnostic passes), which means no data will be getting sent back from the field. Hopefully this can be resolved by the time the Field Implementor does his first upgrade. [editor’s note: turned out to be a minor app permissions issue and was fixed quickly].

Otherwise was bored out of my mind as we were not allowed out at all, due to Easter weekend and the volatility of the Koran-burning situation. But thankfully Easter was beheading-free.

Training took place Monday and Tuesday and I’m quite pleased with how it went. The national staff present also agreed it went well. We led off with a recitation of the Quran, then did introductions and a fair amount of orientation talk. I spoke at length about the goals and benefits of using CommCare, and really tried to stress how the phone was not just ‘for the women’, but being given to both of them to use as a team. But, since women do the house visits, and CommCare needs to be used during the visit to be effective, the women must be proficient in order for the project to be successful. I think they got it.

Then we started playing with the phones and things got a little chaotic. My orderly ‘I demo / you follow along’ approach didn’t hold together, but we went over the basics and then let everyone play around unstructured, as we went around and assisted. (I skipped ‘how to use a phone 101’ because I thought it would annoy the men). Men and women were sitting separately, with 3 phones for each group of 5. Then we did role-play as I thought this would engage the women more and let them drive, but something was lost in translation because… two men came up front and role-played with eachother, one being the female CHW, and the other being the pregnant woman… No idea what they were saying, but I wish I knew because the class was in hysterics and my translator was bright red.

Then when they all paired off, it was still the men handling the phones and asking questions to the women! Eventually I got them to swap back and forth, but even when it was the women’s turn, some of the men were still holding the phones while the women timidly poked at the buttons.

It was interesting to observe the dynamic in the individual CHW couples. I was surprised that a minority of them are husband/wife couples; the rest are other familial relations. Two of the women were literate, one was described to me as “quite smart”, and the two others were old and struggling somewhat. The men varied. Two of them were quite dedicated to making sure their partner was engaged and understood, training them well. The other three I couldn’t get such a good read on, but two of those were paired with the skilled women. Interestingly, it felt like the men’s dedication and commitment to the project’s success was correlated to how religious they were.

By the end of day one, I think all (men and women) had gotten a good grasp on the mechanics of the phone, but I knew the women needed more time to practice. Ideally, alone.

Lunch on the first day was quite the cross-cultural experience. Men and women went off to separate rooms to eat; the food was simply spread out on a cloth on the floor of a barren room with no chairs. Despite my pathological inflexibility, I carefully and laboriously twisted myself into something resembling cross-legged position and tried not to wince too much as I ate. So there I am, chillin’ out with 7 afghan men, when this very intense fellow shouts from across the ‘table’,

I was limping for about an hour afterward.

For day two I knew I would need to separate the men and the women. To facilitate this, I prototyped the [other form that was a nice-to-have on the statement of work, which documents a process that doesn’t even exist yet] (a literate form meant for the men) and added it to the app. By making this form, I hoped to give the men more buy-in to the technology, as well as create an excuse to separate them into another room; they would be trained on this form while the women continued practicing the checklist.

I was afraid the splitting up might be thwarted somehow but it worked quite well; the Field Implementor stayed with the men. The Child Survival Program Manager eventually showed up to assist and man, that guy can talk. Meanwhile I worked with the women in a separate room. The women again seemed to be getting the app, once they were inside that actual pregnancy checklist form. Getting to that form (phone basics, launching CommCare, navigating to the form) was causing more difficulty so we devoted extra time to that. One of the old women had never used a phone before and gave a little speech about how proud she was that she was figuring it out (“this button for yes! this button for no!”)… it was awesome. This same woman also pressed the center button so hard I thought she was going to break it. It was causing her major problems because she was triggering the directional keys in the process. So we had another session devoted to button-pressing technique. It’s amazing what you take for granted.

Being able to deal with the women alone was critical to the success of the training.

We wrapped up at 2pm, ready to go, then Senior Program Manager insisted we wait for someone from the Ministry of Public Health to come speak at 3:30. He showed up at 4:15. But apparently he was a very important person (perhaps even the Director for Herat province, I think?) so it was good that we waited (probably should have practiced my elevator pitch, though…). Then we took the most awkward group photo ever and we were done.

In the days after I was hoping to do some follow-up field visits, to see how the CHWs are managing with the app out in the field, but with the recent prison break of 500 Taliban insurgents via underground tunnel (a statement so ridiculous it feels weird typing it), that is off the table.

Now for the lifestyle section…

And by popular request, the face of CommCare… 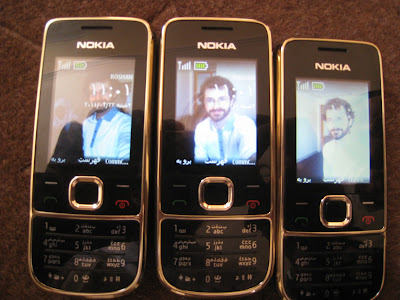